What Is Sentence-Spoken English Tips

English sentences on the main unit points of learning grammar. A combination or group of words that gives a complete meaning thought or idea is known as a sentence.

Firstly we will start with letters here I am not going to explain briefly; shortly, I am going to tell you about sentences that you know about how sentences are made.

I need not tell you about all these things I know you do already, but here I am going to start from basics so these are compulsory if you know all these things then you can go to the next lesson. 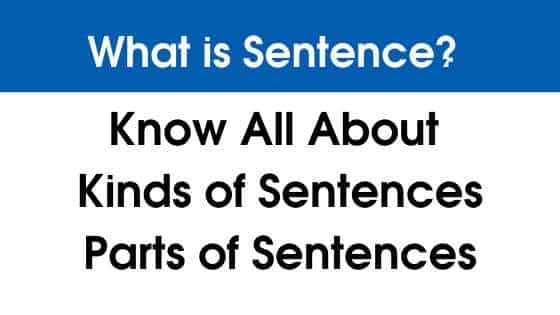 As we know, there are 26 letters in the alphabet in which 21 consonants and five vowels are there.

Words can be defined as a group of letters that have some meanings like age taken example- boy, girl, names, simple, secure, spoken, English, etc.

What is a sentence?

A sentence can be defined as a group of words that conveys a complete meaning, Which contains verbs, subject, helping verbs, etc. Every sentence starts with a capital letter And ends with a full stop ( . ), Question marks (?) or exclamation marks (!), etc.

some meaningful sentences which you can read:-

An assertive or declarative sentence

A sentence that makes a statement or assertion is called an assertive or declarative sentence.

Assertive or declarative sentence are of two types

A Sentence which states something negative or denial is called a negative sentence.

A Sentence with ask questions is called and interrogative sentence, and it always ends with Question marks (?).

Interrogative sentences are of two types:-

2. The sentence starts with Question words

A sentence that shows suggestion, order, command, request, or advice Is called an imperative sentence.

A Sentence which shows a wish, blessing or prayer Is called an optative sentence.

A sentence that shows sudden feeling thoughts and Expression of mind is called an Exclamatory sentence.

3 thoughts on “What Is Sentence-Spoken English Tips”

We have detected that you are using extensions to block ads. Please support us by disabling these ads blocker.